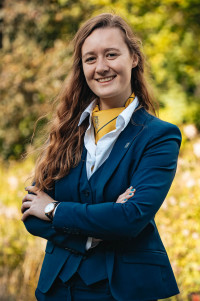 How nice that you took the time to visit this part of the website! Since you came here to get to know the board members a little better (or perhaps because you were bored), let me tell you how I found my place here, in the 52nd board of Abacus.

It was 17:17 on the second of September 1999. In the hospital of Harderwijk a bold, fat baby was born. A few weeks too early, but healthy nevertheless, I came into the world. I would stay bold for 2 full years. My brother David was very excited he got a little sister, but he was also jealous, since he now had to share my parents’ attention.

I continued living in Harderwijk for the next 17 years of my life, where I had a happy childhood with my parents, brother, cats and dog (but I’m definitely a dogperson). The years in primary school flew by. When I was 6 I started playing korfball, but even though I liked it, it wasn’t enough to keep me busy, and when I was 9 my first love came into my life: the cello. Before that I played (like many girls in primary school) the recorder for a couple of years, but I guess I thought that instrument was too small. Maybe the cello wasn’t actually the best choice, since my room at home was really tiny, so whenever I practiced the cello at home, there wasn’t any space left in my room.

Then I went to secondary school in Harderwijk, RSG Slingerbos. I started doing ‘tweetalig vwo’, so bilingual atheneum, which was great because I loved English. My time at RSG was awesome, and since I learned quite easily I never had any trouble with grades or whatsoever. At some point in the 4th class of RSG I started to notice that I simply did too many things at once (I’m still very good at wanting to do too many things at once). I had 3 different small jobs, played korfball 3 times a week, played in 3 orchestras and practiced the cello every day. So after 9 years of korfball I decided to drop that and give priority to my passion for music. A good decision in hindsight, because looking back I didn’t really like korfball anymore.

The choice for study has never been too hard for me. It was already clear when I was young that I loved maths, so I visited quite some open days for it, sometimes looking at some other studies since my interests were broad, but when I was 16 it was clear for me I wanted to study mathematics. The city also wasn’t that hard; I liked Utrecht, but I thought the study there was too theoretical, and I preferred Enschede above Eindhoven.

I quickly found a room, and two weeks before my 18th birthday it was time for the Kick-In! I was so (positively) surprised by the people and the atmosphere at Abacus, I soon joined committees. Starting with the (A)bac(ch)us and the gala committee (I also wanted to help with the Christmas dinner, but a disco ball got in the way), and later in my second year also the Twick-In. It was also in my second year that I started thinking about a board year. Abacus meant so much to me, the people there had become my best friends, and I can honestly say some of it helped me get through the first year of Applied Mathematics. I thought it was time to give something back to the association that brought me so much. So here I am, the chairman and officer educational affairs of the 52nd board of W.S.G. Abacus. We’ve only just started, but I feel like it’s going to be an amazing year with the five of us!

I hope to see you around, I can always be found in the Abacus room (or perhaps the Abscint) to have a chat or a drink!