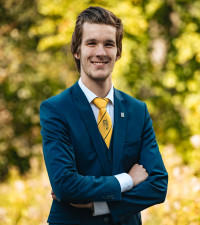 Heyoo, my name is Martijn ter Steege and the stubborn little me always said to my parents: `The only suit I'll wear is a jogging suit'. Well, that escalated, since you can see on the picture on the right that I'm wearing a suit, which is not a jogging suit. Okay, if you are already looking at my picture, then I can introduce myself as well.

I was born in Nijverdal at June 8, 1998. In this nice village between Enschede and Zwolle, I've lived with my partents for my first 20 years , where my parents still live. When I was little, I noticed that I thought football was great. It was not strange that I joined a football club at the age of four, where I'm still playing football today.

My primary school time was logically scheduled. My favourite course was calculating, so during school time I was calculating my sums as soon as possible, such that I could look forward to the break, where I could play football. The downside of these rhythmic eight years is that my other courses were not going that smoothly, causing me to start my secondary school at HAVO (Higher General Secondary Education).

After a year of hard work and finally getting some good grades for all courses (besides art), I could continue with VWO (pre-university education). Because I really like regularity and football was not played during breaks or after school, I had to look for a new hobby, which could fill my spare time. That appeared to be a close call, since my hobby became gaming and I barely passed my final exams.

Then I had to choose my tertiary school. The choice for the UT was easily made, since my sister also studied there and most of my choices were based on her experiences. When I took a look at my exam grades, I found one 8 between all the 6s and 5s and that grade was for Maths, so I based my choice for a study programme on that.

After a first year without activism, but with lots of fun in and around Abacus, I would gladly do some committees in my second year. I soon realized that my spare time, which I formerly spent on gaming, was now spend with socializing and fun and that I am highly satisfied with it. After a road with the Ab-Actie, Sport committee, Translacie, Dies committee and the Study trip committee, I ended up, after some hesitation, in the candidate 52nd board. Apparently people thought it was fine that I would be the board of Abacus, so suddenly at the change GMA, I was appointed as Secretary and Intern.

And here I am now, a year of drinking beer, making stupid jokes and playing games.