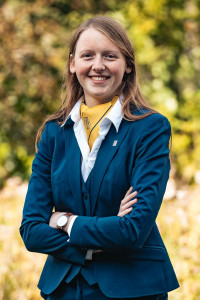 Prepare yourself for one of the most beautiful dates of birth you have ever seen in the possibly many board pieces you have read: 9-9-’99. Yes those are many nines, yes it is a nice date and yes my mother has put a lot of effort into that. After answering those standard questions, it is now time to answer the truly important questions: who am I and how did I end up as treasurer of the 52nd board of W.S.G. Abacus?

To answer these questions, we go back to that specific Thursday night in the nice small city Delden. My father was on the football pitch that evening as usual, but when he got home it became clear that the night wasn’t over yet. While I was born on 9-9-’99, if it had taken only six minutes longer, that date would have been 10-9-’99.

When I was a child I of course went to primary school, everything there went smoothly, except for the occasional ‘mediocre’ I got for my work speed. This was because I got distracted by what was happening outside fairly easily while I should have been working. During primary school I of course started playing football at v.v. Rood Zwart in Delden, which made my father very happy. Unfortunately, there weren’t that many girls at our association, so after two years I stopped and started playing korfball. It became clear to me that that wasn’t my sport, so as soon as there was a girls football team five years later, I went back to Rood Zwart. My mother was a little less happy about that, since next to me and my father, my older brother Niek and younger brother Pim were also playing football. This meant she would spend more time at the football association than she already did.

After primary school, I went to high school. Since the only high school in Delden was meant for just the first two years, I decided to immediately go to S.G. Twickel in Hengelo. Every day we had to bike 20 minutes to our school, but as is expected, we always left to late. This caused us to become friends with the teachers who could let your ‘too late’ marks disappear in exchange for a few profiteroles. It eventually has cost us quite some profiteroles to get through high school.

At high school, it became quite clear that mathematics was a course I liked. Though I did also like other courses, such as physics, chemistry, economics and management & organization. Luckily there were also a few courses that were clearly not on my list of interests, such as biology and history. As soon as I could choose my own courses I quickly dropped these. Approaching the end of my high school career, I had to start thinking about my study choice. As some of you might have already noticed, I’m not that good at making choices. That caused me to enroll for three different study programs one day before the deadline. This way, I was able to delay my choice a bit more. It might not come as a big surprise, but I have eventually chosen to study Applied Mathematics at the UT.

During my first year and a half at the UT, I have lived with my parents in Delden, since it was only 35 minutes travel time. In my first year I immediately became active at W.S.G. Abacus. During the first two years I started doing more committees, so the logical next step was to start thinking about doing a board year. Naturally, it took me a long time to decide whether I wanted to spend a whole year being the board, but eventually I was very sure I wanted to do exactly that. Because of my interest in economics and m&o and since my parents and brother are in the economic field, my function preference was treasurer, so I am very happy this is the way it turned out.

I hope you have enjoyed reading my life story and hopefully I will see you all in the Abacus room to have a drink, a chat or to play a game!

Treasurer of the 52nd board of W.S.G. Abacus