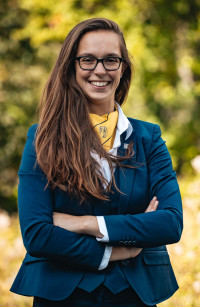 My name is Marjolein Bolten and I’m the officer external affairs of W.S.G. Abacus this year. In this piece I will give you some more information about myself and how I ended up in the board of Abacus.

I was born on Thursday the 7th of October at 10.08 AM in the hospital in Haarlem. At my birth my weight was 3530 gram and my length was 52 cm. When I was four years was too busy at home, according to my parents, so they made me start with gym. At this time I discovered my talent for sports and in this case specific for gymnastics.

After I achieved my first three swimming diplomas I started with gymnastics at a higher level. I did this with joy for four years but after that it was time to start with something else. I started with general music classes and ended up playing flute. Meanwhile at primary school I did well, I did great in math and less great in the Dutch language classes.

Next to music classes I also started with athletics, which I apparently had a talent for, because after a couple of years I was training four times a week. Now it was time to go to secondary school, I chose for a Science direction in the first three years and did the double profile N&T (nature and technology) and N&G (nature and health) in the last three years.  During these years I was still fanatic in sports and after a while I stopped playing the flute and started with swimming.

Because of my wide choice in the last three years of secondary school I could choose almost every direction for my study. I was doubting between Applied Mathematics and human movement science. As you all know I ended up doing the first one :). I then had to choose between Delft and Enschede, and eventually I chose for Enschede because I liked the campus and the small scaled study.

Directly after I started studying I became a member of Abacus and after the committee market I was enthusiastic about becoming active at Abacus, so I joined the Ab-Actie. At the end of my second year I also joined the Twick-In. During my second year at the university I was in the board of the athletics association at the campus and I really liked this. So after a part time board year I wanted to do a full time board year. I really liked the atmosphere at Abacus so I wanted to be in the board here.

Of course this is only a small version of my life, so if you have any questions, want to play a game or have a talk just come by the Abacus room!

With kindest regards,
Marjolein Bolten
Officer External Affairs of the 52nd board of W.S.G. Abacus