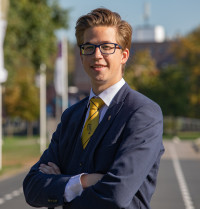 At the moment of writing it is already close to the end of my board year, but while I still can I would like to take the chance to tell something about myself. Although it is already close to the end of our board year, the moment the five of us stood behind the 50th board of Abacus in Citadel T300 still feels like yesterday. I remember Mariya calling our names while my heart was beating in my throat, one strike of the gavel later it was my time to say something. After some nervous words I suspended the GMA and we got congratulated by our predecessors on being in the board of W.S.G. Abacus. An amazing moment, but how did I end up there?

It all started 22 years ago a bit past midnight at the 22nd of December 1996. It was freezing and snowing the whole day, which gave me the ability to never worry about feeling cold. I was born at my parents’ home in Hengelo and they noticed  I had my eyes closed for the first few days I lived. In the end I did open them, but this probably caused my eyes to still look kind of like I have been adopted from somewhere in the far East, although it has gotten somewhat better over the years.

I do not remember much about preschool, so let’s just skip to elementary school. In elementary school it became immediately clear I had (as I guess most of you readers) a talent for math. All other courses were not that hard for me too, so I spent most of my time annoying classmates and writing some detention work. During elementary school I also started playing water polo, playing the drums and joined the scouts. Because three hobbies were a bit much I left the scouts after a couple of years. As everyone who joined our AMW last June might know, in eight grade I got hit by a city bus and ended up in hospital after which I was famously dubbed “Bus Boy” for the remainder of the year.

After eight nice years in elementary school I went to the “Grundel Lyceum”. I was happy that three years later I could pick my own courses and continue with as many science and mathematics courses as I could. I also included the ancient Greek language in my exams, because then I was able to go on an extra trip to Rome. Somewhere during those years I also stopped playing water polo.

So that left me with one hobby, that grew to be my biggest hobby: music. I had drum lessons for somewhat over ten years, I played in a Big Band for many years and formed bands with friends a couple of times. A few years ago I also bought my own digital piano on which I taught myself to play.

During high school I knew all the time I wanted to study Mathematics or Physics. After a while I decided I could also do both and started with my double degree here at the University of Twente. From the beginning on I connected better with the students of Mathematics and really liked the atmosphere at Abacus. As a freshmen I was really impressed by the board members of Abacus that gave up a year of studying to take care of the association and in my second year of studying I realised I wanted to become a board member of Abacus too.  Still, I wanted to finish my third year of studying and get my double bachelor. While that did not work out (oops), I nevertheless went on to apply for the board of W.S.G. Abacus. I am still very glad that that part of the plan did work out.

I hope to see you soon at an Abacus activity, the next drink or in the Abacus room where I will be always willing to join a game.