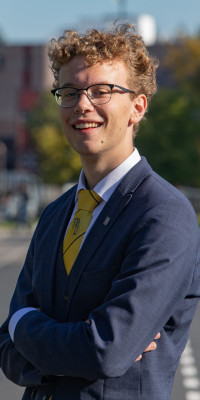 If you ended up on this page, you're either procrastinating by reading random board stories on the Abacus website or you're just really interested in my life. Either way, let me tell something about myself.

On 20 September 1998 it was finally the moment for me to enter this beautiful world. I spent my whole youth living with my parents and two brothers in Borne (the nicest village of Overijssel 2011). In Borne I also went to my elementary school `De Hooiberg', where I already started developing some love for mathematics. Apparently my teachers also noticed this, since they were completely not suprised when my parents told them I chose to study Applied Mathematics some years later. After my elementary school, I went to the high school `Lyceum de Grundel' in Hengelo. This is also where I first met Hugo, who was a class higher than me, but at that moment we weren't aware we would end up in the same board some years later, so we barely talked to each other. During my time in Hengelo, my love for mathematics grew even larger, which caused that in the fourth year of high school I was already certain that I would study mathematics. And since it was the easiest for me to just stay in Twente, I chose to go to the University of Twente..

Now you may be wondering, `did Wout do nothing, besides going to school, during his youth?'. That is luckily not the case. I have played football for almost my entire youth, which, together with the help of my grandfather, caused an unhealthy fandom ship of PSV. Together with my father, I visited and still visit multiple games of PSV to see with how much they would win their match this time.

During my youth, my father learned me to play chess, which as you may have noticed this year in the Abacus room is one of my biggest hobbies. I even joint the chess association in Borne and became youth champion once. All these valuable lessons help me to get to one of my main goals each year on the university: Ending up higher in the chess tournament than Cas. Of course, I have achieved my goal each year so far.

My biggest hobby, however, is making music. When I was 7 years old my parents forced me to try out an instrument and since one of brothers already played the French Horn, I again went with the easy option and also chose to play the French Horn. Over the years I played in multiple orchestras and ensembles and currently I am still playing at the Bornse Harmonie and at SHOT. My choice of playing the French Horn also caused my atypical taste of music, because the French Horn is one of the most important, if not the most important, musical instrument used in movie soundtracks. If you want a good example of this, you should listen to `This is Berk' of the film How To Train Your Dragon.

All this background information does, however, still not explain how I ended up as Secretary of the 51st board of W.S.G. Abacus. When I went to the UT I was not planning on become very active at Abacus, I wanted to do maybe one committee to see if I liked it. So I joined the Freshmen committee and since I joined the Symposium committee, Ab-Actie and Twick-In in my second year, you can say that I quite liked being active at Abacus. At the end of the first and almost my complete second year I spent way too much time at Abacus, so I wanted to come up with a reason to spent even more time at Abacus and there is not better way to do that than a board year.

So here I am, almost at the end of an amazing board year, writing a long overdue board story. If you have any questions about my life or about something completely different, come to Abacus room, since the chances are high that you will also find me there in the upcoming years.