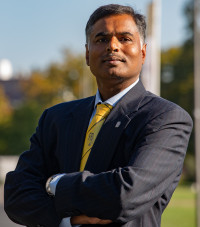 Since you are reading this, you already know by now that I am the general adjunct of the 51st board of Abacus. During my bachelor and master, I have studied Mathematics with major focus on Probability and Statistics.  After completing my Bachelor's and Master's degree in India, I went to the USA for my PhD degree.  After that, I moved to the Netherlands. The role of the general adjunct is to help Abacus maintaining (and/or strengthening) the contacts between the employees and the students outside of the classroom.

I am working at the UT (Department of Applied Mathematics) for quite some time now. So, you may say that I know a thing or two about the role of Abacus, and especially when it comes to the interaction between the students and the employees of the department. From my experience, I think that the interaction here is generally quite commendable, especially when we compare ours to that of our sister programmes/study-associations.  Then the question may come up, do we still need this position of general adjunct?

Well, this is a very common misconception.  Another similar question we face often in the context of not very far from our love-affair "Mathematics" -- do we still need to learn/study mathematics, now that we have computers and Google?  Indeed, when things are running smoothly, we tend to take things for granted, not realizing that without the presence (though invisible or silent) of the very person or entity in question, things may not run as smoothly.

When I agreed to become the general adjunct, I had in my mind a few areas where I could contribute in strengthening the interaction between the students and the employees and/or making it more pleasant. For example, the communication to the employees about the events organized by Abacus.  Day by day our schedule/agenda is getting increasingly busy. As much as I, as general adjunct, or Abacus, as the study association, would like to, we cannot expect that all employees will attend all the events.  However, we can only increase the chances of maximum participation by early announcements of the events.  So, I try to send the announcement the moment an event has been fixed and discussed in the weekly board meeting.

Besides, as per natural law, the demands and nature of interaction between the students and the teachers change over time.  This can be best understood by having a regular discussion with the representatives of both parties concerned.  I am glad that I spend 15 to 30 minutes every week sitting with the other (student) members of the board exchanging ideas about possible interactions.

By the way, I have never been involved in a study-association before (whether in India, the USA or the Netherlands).  So, the very idea of being involved in one such was (and still is) very exciting for me.  I will try my best to help the current board maintain the good reputation of Abacus.  I know that Abacus is in good hands and it will remain so in the future as well.