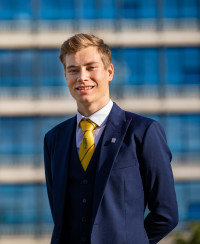 Good job digging so deep into the Abacus website that you found this piece of text describing me in a far too detailed manner! Anyway, now that you are here, might as well tell you all about me.

When it began, the 19th of April in the year of 2002, I was born in the hospital in Deventer. I lived there for at least a day, after which I quickly moved to the nearby village of Epse. A few months after that the Cubicus caught on fire; coincidence? Maybe. I lived in Epse for almost three years, together with my older brother and my parents.

After those three, unremarkable, years we moved one street away to an old farm. This farm was 10 kilometers away from the old house, in the middle of nowhere, on the border between two other small villages, which were called Harfsen and Laren. I went to a small Christian primary school in Laren, but my parents and upbringing were not Christian at all.

At primary school I soon noticed that learning new things didn’t cost me much effort. As a result I completed third grade and fourth grade in one year, instead of two. I was also given loads of cool extracurricular work to do, such that I wouldn’t get bored. Then, halfway seventh grade, and to my own surprise as well, I was told that I could join the eighth grade from that moment. And being the ambitious student that I was, I accepted and finished primary school when I was 10.

During my primary school time I also developed some of my hobbies. I started my football career at the football club in Laren: v.v. Witkampers. I also ended my football career here after 10 years. I even did horseback riding for 5 years. We had three tiny horses at home.  I also developed my musical skills. First with the recorder (which is apparently the English translation for “blokfluit”) for two years, which prepared me for playing guitar. Unfortunately, my guitar teacher quit after 6 years. Instead of guitar lessons I would therefore go to tennis lessons for my last 1.5 years before starting at the UT.

The choices for a secondary school were limited where I lived. Fortunately, I didn’t even have to worry about choosing a school, because my parents decided for me that I’d go to Het Stedelijk Zutphen, which is coincidentally located in Zutphen, a 45 minute bike ride away. In my first year I occasionally took the bus to school. However, the travel time was exactly equal to the duration of my bike ride, so I stopped taking the bus after a while, because I actually enjoyed cycling and had developed a certain kind of hatred for buses. The reason I was encouraged to go to this particular school, was that it was a school that provided extra attention to talented students. (I didn’t say the reason made sense :p) As a result, also in secondary school, I was stuffed with extracurricular work. Besides that, I spent 1.5 hours a day cycling to and from school. When I also had football practice or guitar lessons, this increased to two hours.  I wish I could still do that. Even though it wasn’t my own choice to go to Het Stedelijk, I enjoyed my secondary school time. First I did three years of bilingual education, which included epic excursions to London, Dublin and Edinburgh. I finished three subjects in 5 years rather than 6, such that I could follow two courses at the Radboud University in the time that had become available.

My parents had convinced me that I had to go to a Technical University, so only went to open days in Eindhoven, Enschede and Delft. I immediately knew I didn’t want to go to Delft. I liked mathematics (B as well as D) and physics in secondary school, and got good grades in both subjects. I visited a few studies during the open days, but pretty soon I decided that I would probably enjoy mathematics and physics, so I figured, why not do both? At this point I was used to doing extra work to prevent myself from getting bored. My ‘student for a day’ experience was much better in Twente than in Eindhoven, so I chose Twente without giving it much more thought.

So then it began, in Enschede. I was a 16 year old, socially awkward double degree student. As a consequence I had a lot of trouble finding a room in Enschede and I had to travel more than two hours every day. At first I could be found at both Arago and Abacus. However, I was drawn more and more towards Abacus, because of all the nice people there. I also became a member of D.S.V. de Skeuvel, the ice skating association, not only for ice skating, which I had not done much before, but also for cycling, which they do in summer. I no longer travelled much by bike, so I wanted to do it for fun. With a lot of luck I had found a room on campus starting from December 5th, the best Sinterklaas present I had ever gotten. Though it took a while for me to get comfortable in my new house, because I spent most my time in the Educafé ‘studying’. Only in my second year I got really active at Abacus and joined more and more activities, as well as the symposium committee. I didn’t have clue yet what this would lead to.

Due to the COVID-19 pandemic we had to cancel the symposium and Abacus was largely closed for the rest of the year. Since I was still quite young, I wanted to get some extra study delay and make the most of my student time. However, I thought I was sure that I didn’t want to do a board year at Abacus. I did apply for Solar Team, but I got rejected, because I was too young. Now, there was not much left to do than just continuing my studies. However, studying during lockdowns was hard.

Getting close to a burn-out from having to study too much at home, I decided that I would take a gap year after the summer. I was planning on applying for a student team again, but this time I also was starting to consider a board year at Abacus, since I had become a lot more involved and I heard positive stories from my friends who were already in the board at the time. After a lot of thinking about it, MtS convinced me to send in an application letter at the last moment, just so the option was still open. After some more careful consideration, I finally made up my mind and here I am now.

Do you want to know even more about me? You can always approach me or send me a message! You can probably find me near the Abacus room (if you read this before the year 2023) and you can probably find my contact details by looking around some more. Considering that you found my board piece, I think you can find a phone number or email address somewhere as well.

Thank you for taking the time to read this awfully long ‘short introduction’ about myself! I hope you don’t think you wasted your time and know me a little better now.

Chairman and Officer Educational Affairs of the 54th board of W.S.G. Abacus