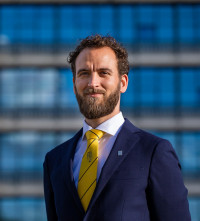 I will not break expectations (much) and serve you the obligatory piece of text about me and how I became General Adjunct of the 54th board of WSG Abacus.

Born in the year 1985, I grew up in one of the twelve university cities in the Netherlands, Wageningen. My parents worked at the Agricultural University and the related research institute. For most of my early live I lived with my mother and brother. I attended my first PhD defense —my mother received her PhD in Enviromental Technology— when I was six years old. While I like to think that this normalized the academic world for me and played a role in becoming a researcher, there is also evidence that this did not play such a big role: My brother was four years old at the time, but did not become an academic.

In Wageningen, I attended primary (St. Josef) and high school (RSG Pantarijn). In high school I first noticed my love for the exactness of math (and the fact that I was good at it). At the same time, I noticed that being good at math allowed me to not study much for many other courses, such as Physics, Chemistry and Economics.

I have always had a feel for optimising my choices and actions. I think that this has, among other things, resulted in being very competitive in, e.g., sports (korfbal, judo, basketball) and games (board games, video games, card games). I really enjoy the competitive and tactical nature of (most) team sports. However, I have also always enjoyed (road) cycling a lot.

In 2003, I moved to Enschede to study Applied Mathematics. Then, informally (or semi-formally?) called Toegepaste Wiskunde, while the formal name was Technische Wiskunde. I became a member of Abacus for the books and participated in many activities and joined several committees. I also joined the korfbal association Vakgericht. During my second and third year, I considered applying for the Abacus board, but at the time I decided to join the board of Vakgericht for one-and-a-half year.

After completing my MSc in 2010, I started my PhD research in Algorithmic Game Theory Applied to Scheduling Problems. In four-and-a-halve years, I got to experience doing research, but also teaching tutorial classes and lecturing. After I defended my PhD thesis, called "Mechanisms for scheduling games with selfish players", I found a PostDoc position at Universidad de Chile in Santiago, Chile. With my then girl friend now wife, we moved across the globe, where we lived for two years. In Chile, I continued my research, which moved more in the direction of online optimisation problems, and we explored all the nature that Chile is rich of. We experienced deserts, mountains, gaysers, pole regions, vulcanos and much more, all in one country.

After two years in Chile, we moved "back" to Europe, to Bremen, Germany, where I had another position as a PostDoc at the University of Bremen. While a vastly less different country than Chile, Germany posed it's own challenges and Bremen is a beautiful city in its own right and it brought its own great experiences.

Since December 2019, I work at the UT again, now as an assistant professor in the Mathematics of Operations Research group (MOR). For teaching, I highly value feedback from the students and I believe that the General Adjunct has the ideal position to decrease the gap between students and teachers. I hope and am looking forward to do exactly that.

Kind regards,
Ruben Hoeksma
General Adjunct of the 54th board of W.S.G. Abacus